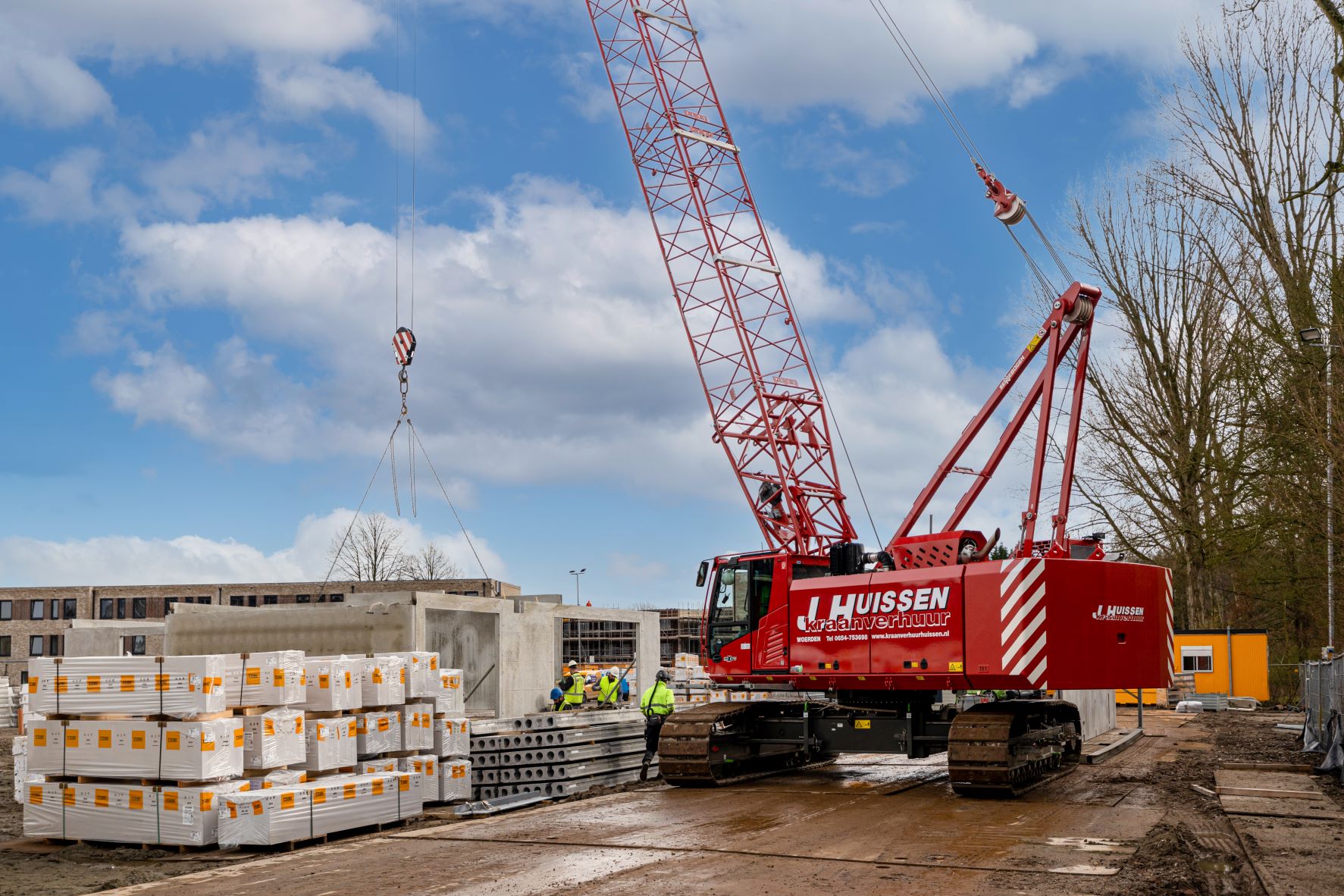 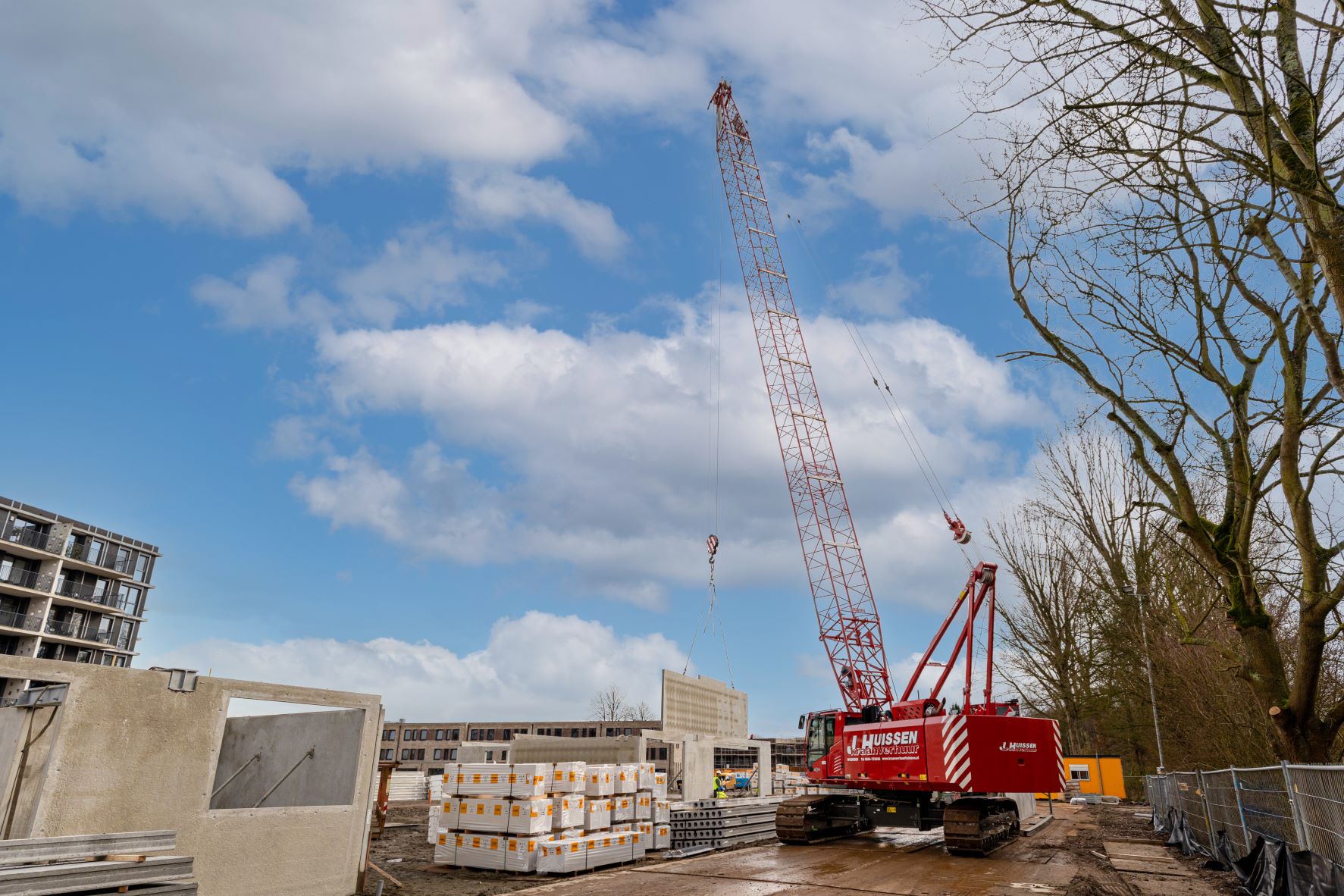 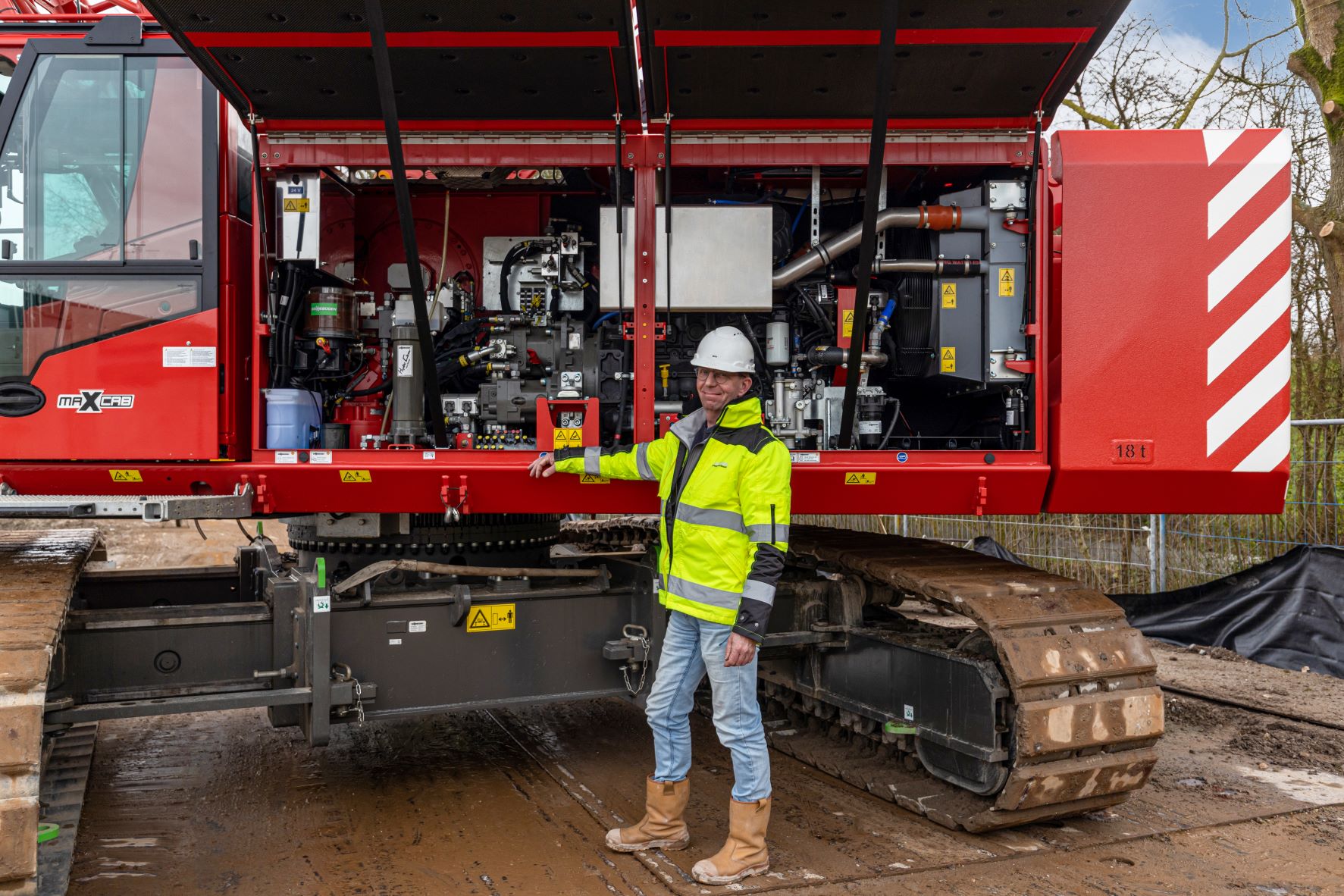 A new, sustainable and environmentally friendly residential district is being built in Rotterdam. In the middle of it, the new 50 t crawler crane Sennebogen 1100G from Jaco Huissen Kraanverhuur B.V. The Dutch crane rental company specializes in the assembly of precast concrete elements, especially for residential construction. Jaco Huissen is particularly pleased that they can already act in an environmentally friendly manner during the construction of the “green” neighborhood with this technologically advanced crane from Sennebogen’s new G series.

On the periphery of Rotterdam, in Oedevliet Park, the Parkbuurt (“Park Neighborhood”) construction project is currently being realized. This project, initiated by the municipality of Rotterdam, aims to replace the blocks of flats that once existed there with a sustainable, child-friendly residential area for families and small households. Phase 4 of the project is currently underway, with a total of 30 prefabricated houses to be built. The individual elements such as floor slabs, walls and ceiling structures are prefabricated in the factory and then assembled on site. The Sennebogen 1100G-series will be used on this site to handle precast concrete elements weighing up to 8 tons. This includes picking up the concrete elements from their temporary storage and moving them in pick and carry operation to their designated place, where it finally assembles them.

As is common in precast assembly, the concrete elements are often delivered several days in advance and temporarily stored at the construction site before they can be assembled. For long-term precast concrete construction projects, it is therefore a must that the crane used has solid lifting capacities, but is also flexible and maneuverable so that it can be moved safely on the usually confined construction site areas. Spatial confinement also determines this residential construction project. Perfect, then, that the 1100 from Sennebogen impresses with a combination of flexibility and performance. This is because the 50 t crawler crane is not only easy to move around the construction site thanks to its compact dimensions, but also proves to be particularly powerful and efficient with its two 120 kN winches, which allow cable speeds of 125 m/min.

The company’s Managing Director, Jaco Huissen, also emphasizes: “After 30 years, we have now replaced our old crane with a new Sennebogen crane. I have been very satisfied with the user-friendliness and stable operation of the 1100 G ever since it was put into operation more than half a year ago. In addition, the machine has a modern stage V engine. So, in combination with Shell’s GTL Fuel, we can now reduce emissions to an absolute minimum.”

The new “green” park district in Rotterdam is thus already living up to its name during construction.