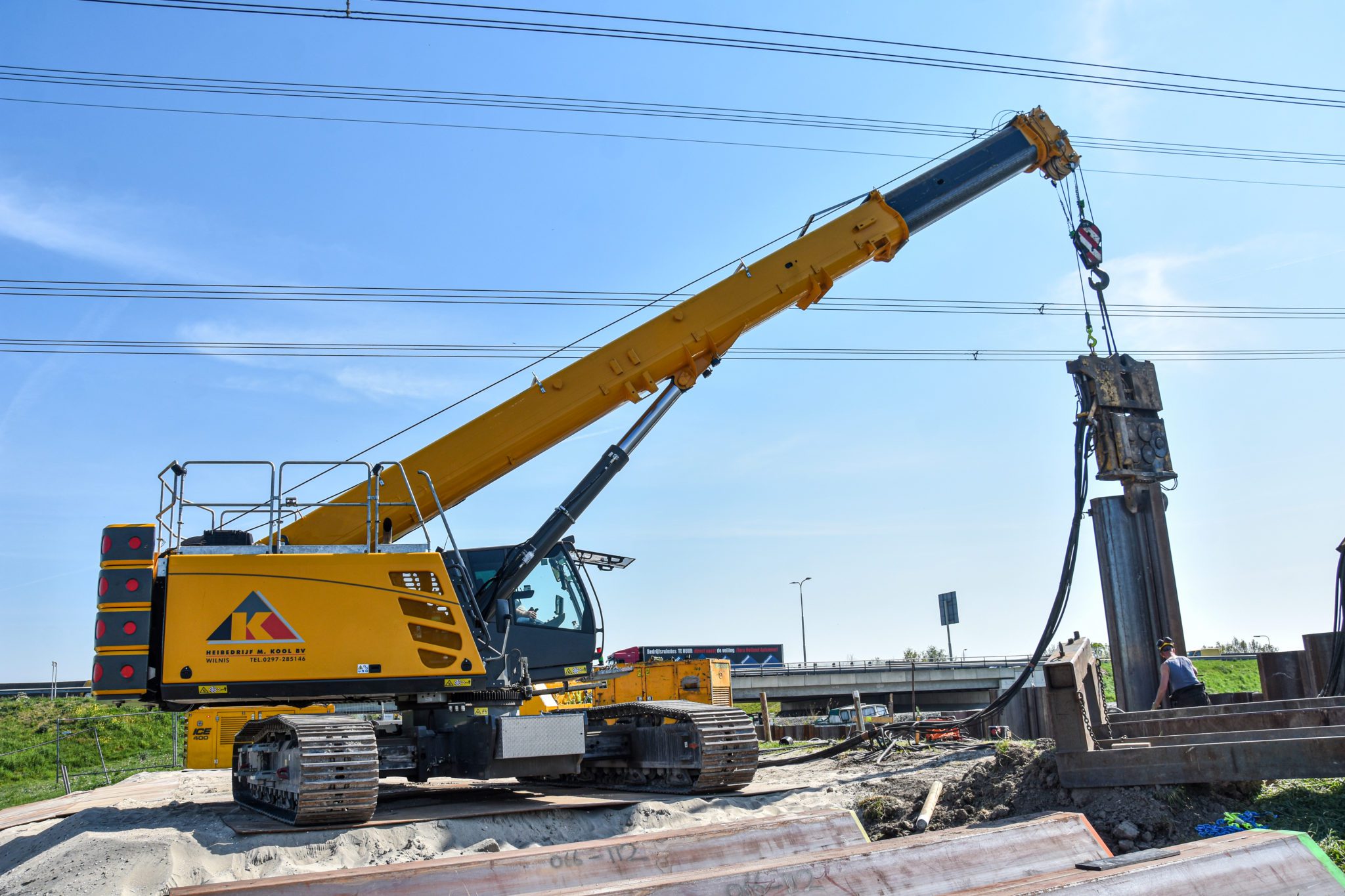 Heibedrijf M. Kool BV from Wilnis in the Netherlands is a specialist in foundation work for more than 45 years. They have now been comissioned by their customer VOBI to install sheet piles for the construction of a new pumping station in the Westland region. This would not have been a problem for the specialists if there had not been a low-hanging high-voltage line involved. On this highly complex construction site, the 70t telescopic crawler crane from Sennebogen convinces with its versatility and precision.

For the Dutch construction company Heibedrijf M. Kool BV, it has always been important to be at the cutting edge of technology as far as their equipment is concerned, in order to be able to carry out their work in a contemporary, sustainable manner and without unnecessary nuisance due to vibrations or noise. Their machinery has already included a Sennebogen 643 telescopic crawler crane since 2011, which has more than proven itself since then. When the need for a larger crane was identified last year, they again opted for Sennebogen ‘s tried-and-tested telescopic crawler crane concept and chose a 673 E with a 70-ton load capacity, which also impresses, among other things, with its outstanding transport flexibility and short set-up time on site.

PRE­CISE MOUNT­ING UN­DER HIGH VOLT­AGE
The project in Westland is demanding because the pumping station – and thus also the steel sheet piles temporarily required for the retaining wall – is to be built under a high-voltage power line, which means a clear limitation of the working height. This is where the full-power boom installed in most Sennebogen telescopic crawler cranes can play to its strengths, as it can be extended and retracted steplessly even under full load and be moved precisely into the desired assembly position. For safety reasons, it was also decided not to install the sheet piles as a whole, but as smaller segments and only weld them together on site. To ensure that the necessary stability is nevertheless guaranteed, the four-segment and five-segment panels are placed alternately so that the weld seams of the interconnected walls are offset.

Additional safety during this delicate work is provided not only by the fact that the large and comfortable Maxcab can be tilted backwards at an angle of 20° as standard, giving the operator an optimum view of his load at all times, but also by the working area limitation by means of the so-called “Virtual Wall”. This gives a signal to the driver if the telescopic boom was about to leave the predefined area and get too close to the power line. In addition, the screen in the cab reliably informs the driver about the exact position of the boom.

THE ALL-ROUNDER ON THE CON­STRUC­TION SITE
However, the flexible telescopic crawler crane not only moves the steel sheet piles into position, but is also used for all lifting operations on the construction site due to its combination of compactness and high load capacity. Thanks to the ability to move with up to 100% load, which is a well-known feature of the telescopic crawler crane concept in general, this multitasking master is predestined for transporting the vibrators and aggregates to the site, taking into account the limited working height, so that they can be used later. This is even possible at an inclination of 2° and 4°. In addition, on this job site in particular, it was also necessary to pull up an earth embankment – no problem for the 673 E either. Heibedrijf M. Kool makes optimum use of the quality and versatility of the machine concept.

NOT ONLY A FIRST CLASS MA­CHINE, BUT ALSO A FIRST CLASS SER­VICE
Heibedrijf M. Kool takes care of the comprehensive realization of construction pits in cooperation with Kool Grondverzet. The good experience in terms of quality and reliability was the decisive factor for choosing another telescopic crawler crane from Sennebogen. The excellent long-term relationship and good service of the dealer Van den Heuvel, to whom Kool attributes in-depth product knowledge, also played a significant role here. Heibedrijf M. Kool uses the 673 for both lifting and foundation work, which has proven the machine to be a true multitasking master.